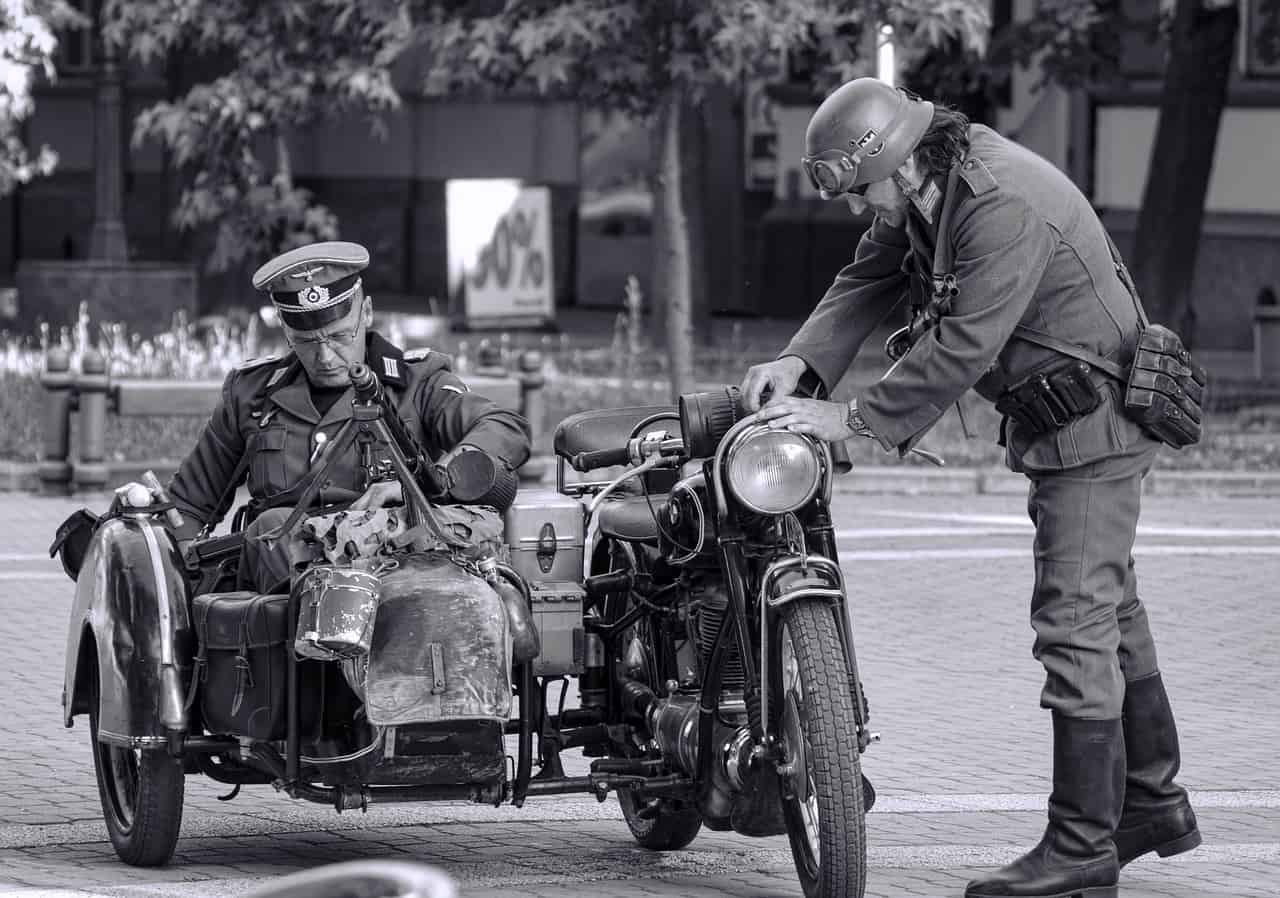 World War II motorcycles – what did the greatest armies ride?

Find out what kind of machines were used on the fronts of World War II.

An iconic car museum burned down
What are Crash pads? How to use them?
Keanu Reeves’ motorcycle makes its way into Cyberpunk 2077 game

World War II is rarely associated with motorcycles. The first associations the average European has with WWII are aviation or navy. Nothing could be further from the truth

Cult motorcycles of the greatest armies

Both Allied and Axis armies were heavily equipped with all sorts of motorcycles – from the German BMW to the Soviet IZ to the iconic and universally praised American Harley Davidson. However, as one would expect, it was not Harley that led on the frontlines

This motorcycle was produced in the USSR during World War II. The history of its production began exactly after the signing of the Molotov-Ribbentrop Pact. In exchange for the supply of raw materials from the USSR, the Nazis pledged technological support to the Soviet armed forces. Given this fact, the Soviet M-72 was an improved copy of the German BMW R-71 motorcycle

The M-72 was a high-capacity motorcycle, which did a great job considering the span of the Soviet Union itself, not to mention the number of miles traveled across the frontlines of Europe. Production began in 1941, and one could make the theory that the motorcycle ceased to be built when World War II ended, but nothing could be further from the truth

Production ended in 1961, 20 years after the start of production, which shows how sought after the M-72 was. These motorcycles had a carbureted, 4-stroke, 2-cylinder engine with a capacity of 746 cm³. M-72 motorcycles could reach the speed of 110 km/h, but the examples with sidecar reached slightly less, 90 km/h. It is worth remembering, however, that these motorcycles were used not only by the Red Army, but also by the People’s Army of Poland supported by the USSR. Between 1945 and 1947, small quantities of this model found their way into use by the LWP, with larger quantities not arriving until the late 1940s and early 1950s

The pioneering motorcycle of the Nazis was the BMW R75 Sahara. It was the most famous motorcycle produced by the BMW concern with its distinctive sidecar. The R75s were used for reconnaissance, liaison, transport and laying telephone cables. They were found on all fronts of World War II, of course as the chief motorcycles of the Wermacht. The R75 was an improved version of the BMW R71 and R12 motorcycles, which were initially intended to serve the Wermacht military as reliable single-trackers

However, after a few years, in 1941 to be exact, the R75 started its production. This model had a ground clearance of 150 mm. The fender clearance made it possible to install snow chains on the wheels. The maximum speed of this motorcycle was 90 km/h. The motorcycle was designed to carry 3 soldiers with full equipment. It was also equipped with a yoke, thanks to which it was possible to mount a MG34 machine gun. The fixed marching speed corresponded to that of infantry and was 3-4 km/h. The motorcycle was also equipped with a gearbox having 4 road gears, 3 off-road gears and a reverse gear.

Although there is a common statement that the ideal is not improved, the designers of the R75 had a different opinion, and as a result, the R75 was constantly modernized. The first improvement was the foot brake lever, which was strengthened. Next, the differential lock was upgraded. The often-breaking transmission spring and front suspension were also improved. In turn, the position light was mounted on the bogie

The BSA M20 was manufactured by the British armament company Birmingham Small Arms Company. The BSA group is known today by another name, Triumph. Although Triumph motorcycles began in 1902, they only became famous after BSA purchased the Triumph company, turning it into the largest motorcycle manufacturer in the world

But back to the BSA M20, production of the motorcycle began in 1937. These motorcycles are known for the longest service in the ranks of British motorized vehicles, as well as the largest number of resulting motorcycles produced during World War II. The first examples of the M20 were civilian models, but this changed with the outbreak of World War II, which resulted in the modification of the M20. The motorcycle was equipped with a 496cc single-cylinder engine, and a 4-speed gearbox. It powered the British, South African and Swedish armies.

What is a wheelie? We explain!
Starting a motorcycle for the first time – how to do it step by step?
What is the BOBLBEE GTX? It’s a backpack and… a protector!
The Chinese want to release motorcycles in Europe. What do we know about these machines?
Norton officially returns to motorcycle production