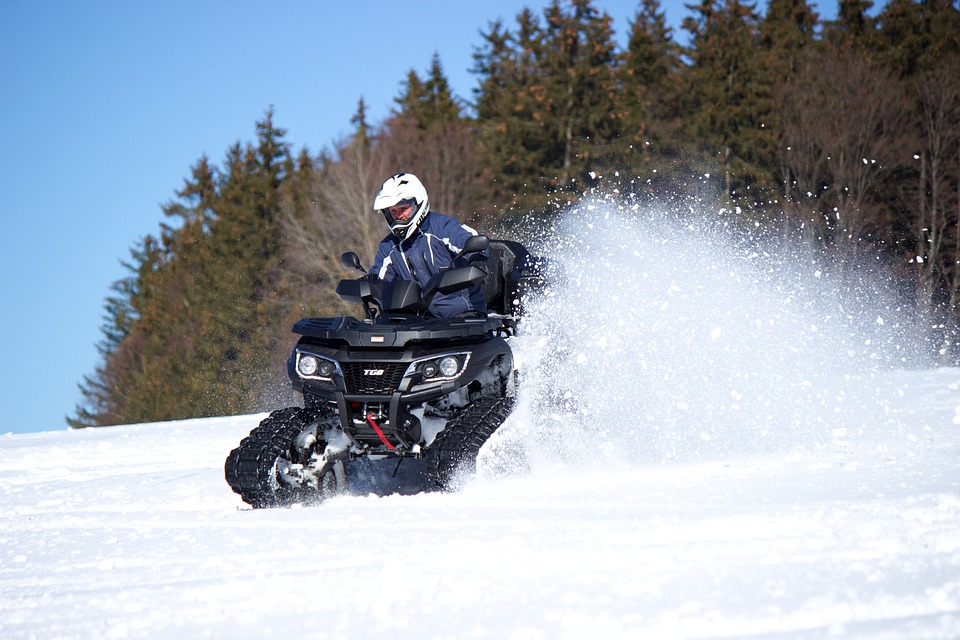 The most interesting uses for quads in winter

Not many people realize that the quad is perfect for winter, thanks to several practical uses. Learn about some of the most interesting ones.

What are Crash pads? How to use them?
Trend. Motorcycle manufacturers raise prices of unicycles
First motorcycle: how to get around it?

Although quads are most often seen in summer, when temperatures encourage off-road rides, winter also has a lot to offer off-road enthusiasts. Check what we have prepared for you.

It often happens that ATV owners hide their machines in the garage after the season is over and they are properly prepared for winter storage. However, the winter period is also conducive to off-road excursions. What is more, it is an additional challenge for the driver, who has to face difficult weather conditions. It’s a great way to break barriers and overcome fears.

It goes without saying that an ATV will come in most handy in areas away from cities. Snow is an integral part of the winter landscape. Although the winters in recent years have been quite mild, it is not uncommon for snowfall to create quite a problem for drivers and other road users.

One of the most practical uses of a quad in winter will be to attach a scaled-down snowplow, thanks to which you can easily deal with even the largest snowdrifts. On the market you will easily find a suitable model which will perfectly fit to your quad. Additionally, thanks to its small size, a quad plow will be able to clear inaccessible areas and can serve as an additional roadside assistance in case of an emergency.

An example of good plows attached to quads will be the SHARK 52″ (132 cm) plow and the SHARK 60″ (152 cm) plow with an adapter. These plows have high strength, which translates into the ability to work with other heavy loads such as salt, coal, gravel or sand. Thus, it will be a year-round investment. The steering is done with a winch or manually.

Another proposal is designed for people living in mountainous areas. Traditional quad wheels are not suitable for fighting snow-covered hills. While a purpose-built snowmobile will work as well, a much better option is to get some tracks (similar to those found on a tank). This way, you will be able to save money and improve the capabilities of your four-wheeler. As with the plow, this will be an expense that will pay for itself during both summer and winter work. The tracks can handle snow, asphalt, and heavy terrain.

Caterpillars equipped with an advanced amortization system is an expense of several thousand dollars, but it is an investment worthwhile – especially noteworthy are the designs of the Canadian company TJD. It is worth mentioning that a set of four tracks weighs in total as much as 100 kilograms and after installation drastically changes the center of gravity, height or width of the four-wheeler. Nevertheless, the mini tank is a great investment, which will return the favor in the most difficult conditions – even on incorrigibly steep slopes and the most icy routes. However, such high functionality has its drawbacks – speed and agility. The tracks significantly reduce the maximum speed and acceleration of your vehicle.

The last suggestion will be an off-road challenge. Winter weather creates ideal conditions for amateurs to break their own limits. The most important thing is, of course, the right clothing to protect you from the cold. Good gloves and thermoactive clothing are a guarantee of success. The best thing to do is to test your skills on the routes you take during the summer season. It will certainly be a valuable experience for you.

Loading...
Newer Post
How to ride in a group with a beginner motorcyclist? Some important rules!
Older Post
How to maintain a motorcycle chain before the season?

What does SEO stand for?
An iconic car museum burned down
When should a motorcycle engine be overhauled?
What are Crash pads? How to use them?
A good motorcycle route – how to map it? What should I pay attention to?